Iren Group is committed, as evidenced by the corporate mission and values and the Business Plan, to enhancing the diversity present within the Company, providing a healthy work-life balance and improving the quality of the working environment. The aim is to work as a team, to add value to the outcome of individual work and to increase a feeling of belonging, creating shared social, cultural, professional and intellectual terrain.

The Group guarantees non-discrimination of personnel in selection, hiring, training, management, development and remuneration policies, as provided by the Corporate Code of Ethics. This commitment has guaranteed that no related breaches occurred in 2021, continuing the past trend.

There were no breaches associated with discrimination practices in 2021

For years, the Group has activated a series of articulated diversity programmes for the organic oversight of which, as of 2015, the Welfare and Diversity organisational unit was established, within which a specific Welfare&Diversity area operates. Therefore, it is a path of application of inclusion policies that recognises and values differences, actively managing them and leveraging them to increase the competitiveness of the Group. The main areas of attention are gender, age, disability and diversity in nationality, for all of which the Group has activated, in various ways, programmes and initiatives, including the participation, together with 26 other Utilitalia-associated public service companies, to the “Utilitalia Pact - Diversity makes the difference“ consisting of seven commitments to concretely promote inclusion and diversity of gender, age, culture and ability within company policies.

In confirmation of the importance attributed by the Group to the enhancement of diversity and the inclusion of all the resources present in the company, in 2021, the “Policy on Diversity and Inclusion in Iren Group“ and the “Policy on dealing with violence, harassment and bullying in the workplace“ were approved and disseminated (published on the website to which reference should be made for further details). The two Policies are directly linked to the principles of the Code of Ethics and formalise the Group’s commitments to the development of an inclusive working environment, respectful of all forms of diversity, inspired by the principles of fairness and dignity in professional relations, and free from discriminatory behaviour.

As part of the diversity, equity and inclusion issues, the Group is launching the Pay Equity & ILM® Maps project, an additional analysis that will identify and correct any pay gaps.

The policies to enhance diversity are also reflected in the adoption of flexible working methods to reconcile life and work, in non-discrimination, in the enhancement of skills, in the drive towards female managerial skills and in training, through specific programmes aimed at increasing the level of awareness of the value of diversity and to create an inclusive work environment.

Reforms in labour laws and pension systems, which prolong people’s tenure, have produced a significant effect: for the first time, there are at least four generations working side by side, bringing with them a different perception of work, roles and relationships. The diversity and coexistence of different generations offer opportunities for enrichment and openness to change, to address technological revolutions and drive innovation, leveraging the breadth of experience and knowledge. Facilitating cooperation and integration between seniors and juniors requires understanding each generation’s strengths, limitations, and values toward their work and creating a company culture that actively demonstrates respect and inclusion. The Group’s initiatives in support of generational diversity and training are the tool par excellence for promoting communication and the exchange of experiences between generations, stimulating productive confrontation and the transfer of knowledge and skills to ensure that differences are recognised and valued.

The effect of the policies adopted on gender diversity is also demonstrated by the inclusion of Iren Group in the Bloomberg Gender-Equality Index (GEI), which guarantees transparency in the practices and gender policies implemented by listed companies, deepening and expanding ESG information available to investors and the financial community. The index measures gender equality based on five pillars: female leadership and talent pipeline, equal pay and gender pay equity, inclusive culture, anti-harassment policies and advocacy towards women. The inclusion in the GEI reflects a high level of transparency and overall performance consistent with the five pillars of the framework.

Aware of the fact that the path to achieving gender equality also passes through an adequate presence of women in all sectors that will offer the most outstanding professional and career opportunities in the future, the Group participates in different collaboration programmes with external actors. Significant in this context is the collaboration, already started in 2018, with Valore D – an association of companies that promotes diversity, talent and female leadership for the growth of companies and the country –, which has prepared a “manifesto“ for female employment, signed by Iren Group. The document consists of nine points through which the Company undertakes, gradually and compatibly with its sector and size specificities, to adopt clear and measurable objectives, with performance indicators monitored periodically, to be shared internally. In order to achieve the objectives included in the manifesto, the Group also implemented several activities in 2021. These include webinars and talks, included in the online training available on the company Intranet, which allow for an in-depth look at topics such as: the influence of stereotypes on decisions and how to fight them, how the pandemic changes the relationship between the genders, sexism in language and awareness of language used in the workplace, and the use and amount of diversity to learn how to work better. In addition to these initiatives, a series of moments of online discussion and reflection has been added, proposed in collaboration with Valore D Talks Academy and open to all Group personnel, to raise awareness and inspiration on issues related to diversity and inclusion, applicable in their own professional and personal environment.

The framework of the fourth industrial revolution (4.0), which requires new skills and continuous personal and organisational improvement, includes the training course aimed at female staff and oriented to develop digital and managerial skills to ensure empowerment and engagement. In 2021, the Women 4.0 Mini Master Leadership Programme was launched to promote gender equality. The initiative, which involved 12 female colleagues of the holding company and of the different Business Units, completed the training cycle, carried out in 2020, “Empowerment & leadership of women for Industry 4.0“, aimed at increasing skills and abilities oriented to develop greater familiarity with the processes of innovation.

In 2021, the Group launched a new collaboration with Fondazione Libellula – an institution committed to raising awareness of all forms of violence and discrimination and supporting the development of an inclusive culture in organisations – becoming part of the network of adherents. Through this collaboration, a webinar on “Cultural Diversity as an Opportunity“ was organised to raise awareness of the importance of inclusion and inform about the benefits of properly managing diversity through the use of cultural intelligence.

STEM (science, technology, engineering and mathematics) education currently represents a part of gender inequality, especially in the context of present and future technological revolution. Aware of this gap, the Group has contributed to the #ValoreD4STEM survey on women with STEM careers in organisations, administering a questionnaire to all women with a degree or who hold a technical-scientific role within the Group. On this topic, the Role Model project continued in 2021, in collaboration with the ELIS association, a non-profit educational organisation that targets young people, professionals, and businesses to respond to the schoolwork gap, youth unemployment and contribute to the sustainable development of organisations. Through the testimony of Role Models, the project aims to orientate secondary school students to follow their aspirations, with particular attention to the sensitisation of girls towards STEM disciplines. Moreover, the Group supported the fourth edition of the Ragazze Digitali [Digital Girls] project, a summer camp, in digital format – organised by the Reggio Emilia and Modena section of the EWMD (European Women’s Management Development) association and the University of Modena and Reggio Emilia – aimed at young people who have completed their 3rd and 4th year at all high schools, intending to bring them closer to IT, programming and the culture of doing, and to stimulate their digital creativity using the learn by doing approach.

During the year, the Group launched a new research project with Luiss Business School on the topic “Women Empowerment @Iren – Enhancing the role of women in companies in the energy, infrastructure and transport sector“, with the aim of setting, from a methodological point of view, the actions already carried out and planned by Iren, in order to understand the phenomenon of gender equality from different perspectives, and to direct the future strategic lines of the Group.

Iren also took part in the 2021 edition of 4 Weeks 4 Inclusion, the series of meetings dedicated to inclusion and the enhancement of diversity that involved more than 200 companies, in which it organised its own event for an in-depth analysis of the inclusion strategies and initiatives implemented by the Group.

Also, Iren Group guarantees disabled personnel the conditions for the best possible integration into the workforce, operating under current legislation.

The average female presence in the Group during the year, equal to 2,195 women, represents approximately 25% of the yearly average number of employees, an increase compared to 2020 (24.3%).

Overlooking the effect of the consolidation, as of 2019, of the company San Germano which, due to the type of activities carried out, consists primarily of male staff, the percentage of female staff (26.7% in 2021) has been steadily increasing over the last five years.

With regard to skill development, the promotion of women’s managerial skills and the development of work-life conciliation tools, the anti-discrimination policies implemented during the selection stage have increased the attractiveness of the Group for women, also within professions that are typically characterised by a strong technical component traditionally “reserved” mainly for men. The recent hires of young female graduates, even into strictly technical sectors such as waste or site & network engineering, is evidence of this.

The issue of female presence is taken up among the objectives of the Business Plan to 2030 in which it is foreseen to increase the number of women in managerial positions in the Group. 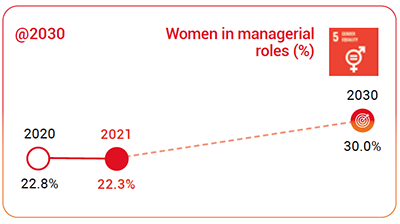 Equal remuneration between men and women is ensured by the application of the National Collective Labour Agreements in which minimum salaries for each employment category are defined. The average basic salary per the qualification of women (details in the section “Iren People in figures“ at the end of the chapter) is, however, slightly lower than that of men, due to three types of factors: a higher percentage of women working part-time (12.5% of women compared to 2.1% of men), the lower average working seniority of women compared to that of men, high incidence of qualified technical roles that historically come from the predominantly male school system. Through selection policies relating to the topic and the introduction of a reward system with homogeneous policies for the entire company population, the Group has set itself the objective of rebalancing this situation as much as possible, in view of the reference labour market, also through specific interventions on selection policies, in order to increase the presence of women and develop a pool of female talent, not only in white-collar roles but also in technical-operational ones.

In line with the provisions of the Company’s Articles of Association and current regulations on equal access to the boards of directors and boards of statutory auditors of listed companies, a balance between genders is ensured in Iren, with 40% of its members being women. On the whole, on the Boards of Directors for Group Companies there are 39 women, amounting to approximately 24% of total members (164 people of which 33% in the 30 to 50 age group and 67% over 50).

Employees were also able to take advantage of the various forms of flexible working that the Group provides, above all smart working, of the specific training provided in these cases and of the services described in the paragraph on Corporate Welfare. Upon their return to work, all employees were able to resume the job they had filled before their period of absence or a job with equal professional content in cases where organisational changes occurred in the meantime that meant they could not return to the same position.