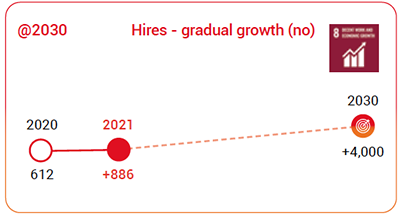 Hires under 30 represent 44% of the total hires, a figure that is destined to grow, in line with the new objective set out in the 2030 Business Plan and demonstrating the attention that the Group pays to hiring young people.

In line with Group policies, among contracts subject to expiration during the year, 100% of apprenticeship contracts were confirmed (except for 6 cases of voluntary resignation), while fixed-term contracts were renewed within the limits of replacement needs and seasonal operations.

The main reason for termination is related to consensual terminations of employment linked to the demographic rebalancing plan, with incentives to leave. Almost all terminations due to the expiration of fixed-term contracts depend on the San Germano company (118 in 2021). There were no collective redundancies and/or redundancies for economic reasons.

1 Agreed transfer to companies which are not part of the analysed perimeter.
2 Turnover was calculated as ratio of outbound employees to the number of total employees at 31/12.

In the preparation of the Business Plan, studies and simulations were carried out to assess the Group personnel eligible to retire over the plan period. Consequently, the Group is preparing to handle these potential terminations in the period 2021-2030, taking into account possible organisational changes and the new skills needed. In the Group there are no specific pension plans, however, all legal and contractual obligations are respected.

Turnover increased compared to 2020 due to the generational turnover process, which also led to a high number of new hires and the use of pre-employment training courses.