Management of the integrated water service

The supply of water for the distribution of drinking water to the communities is carried out in compliance with regulations and concessions and according to effectiveness and efficiency criteria.

The criteria for using resources consider several factors: authorised quantities, size of reserves in the main reservoirs, the quality of available surface water, the hydrological features of the basins, final data relating to the previous year and the current year.

The total volume of water fed into the network in 2021 is in reduction compared to last year.

The commitment of Iren Group in the valorisation and protection of the water resource is expressed in the constant activity of research and reduction of network leaks and in the awareness of customers and citizens to the reduction of waste. In fact, in the 2030 Business Plan, the Group has planned significant investments to make the water distribution service increasingly efficient, with the aim of reducing water withdrawals from the environment and significantly reducing network leaks.

Initiatives for the reduction water network leaks include the districts division: a technique that involves dividing the networks into small homogeneous areas, the so-called districts, which allow daily monitoring and constant analysis of hydraulic parameters. In this way, the instrumental leak detection campaigns are punctual and targeted only to the districts on which the monitoring has detected hidden leaks. Currently 60% of the total managed network is divided into districts, in line with the 2030 target of 90% of managed networks. The district division also produces a benefit in terms of reduction of energy consumption which, in 2021, amounted to around 140 TOE 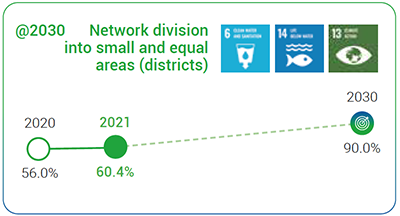 Urban wastewater from public sewers is treated at 1,337 treatment plants of varying capacity and type. In the central plants, pre-treatments are carried out to remove coarse matter, sand and oils, primary treatments to remove settleable solids and traditional secondary and tertiary treatments for nitrogen removal and with chemical and biological dephosphating systems. The Group also manages several phyto-purification plants that use plants’ treatment activity and are used both for the purification of sewage (sub-surface flow system) and for the refinement of water treated in traditional wastewater treatment plants (surface flow systems).

1 For the volumes of water treated, all the Group’s wastewater treatment plants with a capacity of more than 2,000 residents equivalent are considered. In Liguria, the Group does not manage the sewerage and treatment service in the Savona and Imperia areas.

1 For the calculation of pollutant reduction, all the Group’s treatment plants with a capacity of more than 2,000 residents equivalent are considered. In Liguria, the Group does not manage the sewerage and wastewater treatment service in the Savona and Imperia areas.

The Group’s long-term objectives also include increasing the capacity of its sewerage treatment plants in order to provide increasingly extensive and efficient service and to improve the environmental impact of wastewater management.

In 2021, the Group experienced a slight reduction overall compared to 2020 due to the divestiture of certain small facilities, collating sewer networks to existing facilities with remaining available capacity, partially offset by new acquisitions and capacity increases on existing plants. Progress toward the goal set in the Business Plan will be made up from 2022, when a capacity increase of approximately 27,000 population equivalents is expected. 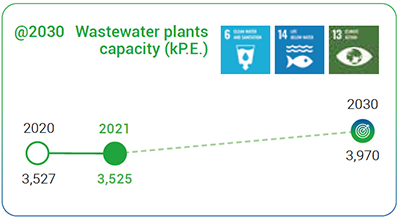 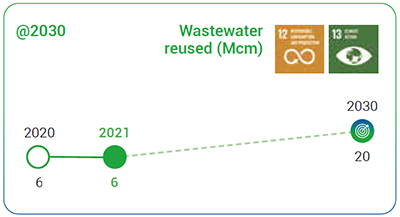 All the water bodies that receive wastewater treated by the Group in the Emilia and Piedmont regions fall within the Po River basin. The land lies within an area declared as sensitive so the plants, depending on their size, are subject to the application of the strictest nitrogen and phosphorus limits.

The wastewater treated by plants in Liguria’s served areas is discharged into the Ligurian sea (mainly the Gulf of Genoa, the Gulf of Tigullio and the Gulf of La Spezia).

The Water Safety Plan (WSP) is a model, introduced by the World Health Organisation, that is based on the assessment and management of risks related to the phases of the integrated water service, from the capture to the final use of water, with the aim of protecting the water resource and reducing potential health hazards.

In 2019, Iren Group started the implementation of the first four WSPs, proceeding to identify the supply areas with the highest number of inhabitants for each of the areas served. The first WSP launched was that of Brugneto (Genoa), serving 170,000 inhabitants, followed by three others in the main provinces of Emilia (Parma, Piacenza, Reggio Emilia).

Provincial multidisciplinary teams have been created, involving both internal Group structures and external control bodies (AUSL, ARPA, Regions, ATOs and Municipalities), which have started the process of assessing the risks of the area under examination and the existing control measures, hypothesising possible improvement actions and identifying operational monitoring tools.

In the water risk assessment, related to the first WSPs launched, a particular focus has been on climate risks intended both as exceptional weather phenomena (floods, severe droughts) and as changes in the quality/quantity of water resources due to climate change.

The first WSPs, completed in December 2021, will be followed by the launch of the remaining plans according to a defined chronological schedule aimed at prioritising the areas serving the largest populations, while also considering the largest number of sensitive users served (hospitals, nursing homes, schools).