Iren Group analyses in the Strategic Plan the macroeconomic, financial, energy and climate context and scenarios in the short, medium- and long-term to identify the important factors for its business from a competitive, sustainable, regulatory and normative point of view and that may affect the pursuit of its development targets. Detailed information about the energy, regulatory and financial scenarios is provided in the Group’s Consolidated Financial Statements.

The Sustainability Scenario in 2021 highlights how the Covid-19 pandemic, while raising awareness of the vulnerability of our development model and the strong interconnectedness of environmental and social dimensions, has resulted in critical impacts around the world on progress towards achieving the Sustainable Development Goals of the 2030 Agenda.

The United Nations 2021 Report (“The Sustainable Development Goals Report 2021“) describes significant impacts: an increase in the global extreme poverty rate for the first time in more than 20 years; 101 million children falling below the minimum level of proficiency in reading and many young people at risk of dropping out of school due primarily to an increase in child labour and a wave of early marriage involving mostly girls; and a growth in domestic violence against women and unpaid care work increasingly on the backs of women and girls, impacting educational, income and health opportunities.

Despite the economic slowdown, concentrations of key greenhouse gases have increased, and the global average temperature has reached about 1.2°C above pre-industrial levels. The climate crisis is joined by other interconnected environmental crises: biodiversity decline at an unprecedented rate, forest loss, and ecosystem degradation at a rapid pace.

The pandemic has also brought enormous financial challenges, especially for developing countries, with a significant increase in debt distress and a sharp decline in direct investment and foreign trade.

However, the UN Secretary-General highlighted that it is still possible to achieve the 2030 Agenda and the Paris Agreement on climate change as long as there is an imperative “on the part of governments, cities, businesses and industries to ensure that recovery reduces carbon emissions, conserves natural resources, creates better jobs, promotes gender equality and addresses growing poverty and inequality“.

In February 2021, the G7 – which was also open to Australia, South Korea, India and South Africa, as well as the UN Secretary General – included in its discussion topics the development of a response to the Covid-19 pandemic, with the aim of building a better post-pandemic reality, responding to environmental and climate emergencies, making a commitment to leave no one behind, as stated in the 2030 Agenda. G7 member countries, ahead of COP26 on climate and COP15 on biodiversity, committed to achieving zero net emissions by 2050, to halt and reverse biodiversity loss by 2030, and also agreed to donate one billion vaccines to other countries.

The G20, held under the Italian presidency in Rome in October 2021, placed the health emergency, the climate crisis, global poverty, and gender and generational inequalities at the centre of its agenda. For the first time, all G20 countries have acknowledged the scientific validity of the 1.5°C target, have committed to curb their emissions so as not to lose sight of this goal, and have taken on the goal of CO2 neutrality around 2050. In addition, economic support was promised to the poorest countries regarding climate. The reform of the international taxation system has been added to the climate goals, to ensure that all companies pay their fair share of taxes, and the overcoming of protectionism in health products, also with the aim of ensuring more vaccines and intensifying the links between finance and health to find new ways to assist the world’s poorest countries.

On 13 November 2021, COP26 concluded with nearly 200 countries agreeing to the Glasgow Climate Pact, which confirms the goal of limiting global warming to 1.5°C above pre-industrial levels, with a 45% reduction in CO2 emissions by 2030 compared to 2010 and achieving net zero emissions around mid-century, accelerating efforts to phase out unabated coal and inefficient fossil fuel subsidies, and providing targeted support to the poorest and most vulnerable countries toward just transition. The Pact provides, among other things, that by 2030 at the latest, countries will have common commitments to reduce emissions over a 10-year period and will have to update their decisive contributions at the national level by 2022. Starting in 2024, a new method will be adopted to ensure that countries use the same metrics to report their GHG emissions. Decisions have also been made to operationalise a new global carbon market, avoiding double counting of credits and incorporating human rights within market mechanisms.

The European Union has made further efforts in the last year and has confirmed its global leadership in policies for sustainable development, with a commitment to address climate and environmental issues and to develop policies for “an economy that serves people“. The strategy outlined in the Green Deal shows the way forward to achieve the goal of making Europe the world’s first climate neutral continent. A challenge that requires substantial public funds, such as those of the Next Generation EU, but also private funds that find in the EU Taxonomy (see page 120) – whose delegated acts were formalised in 2021 – a tool to guide towards economic activities that can be considered sustainable in view of the transition towards economic growth without negative impacts on the environment and, in particular, on the climate.

The European challenge also drives Italy, which finds a relevant opportunity in the Next Generation EU, the program for recovery, aimed at building increasingly sustainable, resilient and digital societies and economies. Italy’s recovery and resilience plan (PNRR) – presented on 30 April 2021 with green light from the European Commission on 22 June 2021 – calls for reforms and investments, to be implemented by 2026, to help the country become more sustainable and resilient. The Plan, designed to foster economic development and create jobs, has three main axes:

The investment projects of the PNRR are grouped into 6 missions, to which a portion of the more than 235 billion Euro planned for its implementation is allocated: 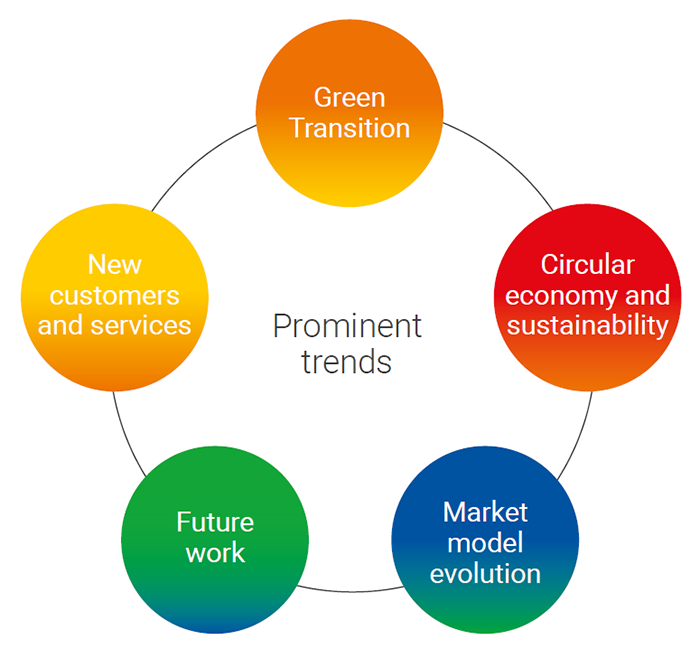 In this context, Iren analyses and evaluates the prominent trends that, in the long-term, will be decisive in terms of risks and opportunities for the sustainable development of the Group.

An important role is attributed to scenarios related to climate change and its effects on the Group’s activities, deriving from the physical environment – acute phenomena (heat waves, floods, etc.) and chronic phenomena (structural changes in the climate) – and the transition situation towards a low-carbon economy. Underlying the Group’s medium term (2026) and long term (2030) strategy are various scenario analyses related to the climate change impact:

Impacts, risks and opportunities arising from the scenarios are considered in planning. To this end, three strands of analysis of the Strategic Plan have been structured:

The analysis of the impacts of climate change, taking into account the variables underlying the different scenarios, has led, for example, to consider for the physical risks the rising trend of temperatures and to analyse the impact, in terms of marginality, that this trend will produce on the lower production of heat for district heating and the increased production of electricity to meet the growing demand for summer air conditioning. Another analysis concerned the production of electricity from hydropower plants in relation to reduced rainfall. With regard to transition risks, for example, the reduction in margins associated with the sale of natural gas is considered.

The analysis of the effects of the scenarios described in the business processes, consistent with the guidelines of the TCFD (Task Force on Climate-related Financial Disclosures), was further implemented in 2021 by developing a management model enabling the assessment of risks and opportunities related to climate change that support strategic choices (see page 80).